The foundation course covers how to optimise and improve SEO on any given site. It dives into important ranking factors for search engine rankings. It also shows link-building strategies and how they can be applied to your overall digital strategy.

What the Course Covers

We break down the secrets of digital marketing into small chunks
This course is for absolute beginners and covers how to build your own brand, apply marketing campaigns, build an effective brand strategy and apply advanced marketing strategies.

You will learn the key elements for creating an effective SEO strategy and lay the foundation for ranking higher and improve your online visibility.

You will learn how to find and determine the most suitable words and phrases that will have the greatest impact on you SEO.

Gain a clear understanding of the factors that influence a website’s online visibility and how to use them to improve your online presence.

Learn how to make use of a variety of on-page SEO techniques in order to improve your ranking and gain more relevant organic traffic.

Gain familiarity with off-page optimisation techniques and their importance in improving your website’s authority.

You will learn about using website crawlers to run a site-wide audit in order to detect issues on the website as well as avenues for improvement.

Gain insight into a variety of useful tools that will aid you in optimising pages for search engines and improve your website’s performance. 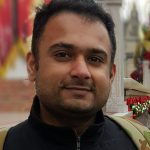 Ajay Chavda is the co-founder of Weboptimizers, a digital agency which has helped grow countless companies like Luna Park, Melbourne Central, Lombard, Linen House, Novotel & hundreds of other Australian brands. Ajay has also worked closely with Google on numerous projects including UX/UI projects, Audience research & Ads Interface change. Ajay has managed and supervised over $50Million in ad spend over 10 years. Ajay is also rated on hackerone and recognised by companies like Slack, Servicenow, Salesforce, Zendesk, UBNT, Shopify and many others.

We are the team behind the renowned marketing agency Weboptimizers.We have grown the likes of Luna Park, Melbourne Central, Novotel, Bfree & countless other name brands. Our campus houses a digital agency so you will meet a lot of professionals in this field and explore exciting career pathways.

Learn from teachers who have hacked Salesforce, Slack & UBNT and who are managing digital marketing agencies in Australia.

You will learn technologies and tools that are used to craft world class strategies for some amazing brands in Australia from the best growth hackers in the industry.

Work with the experts

You will have access to break out areas where you will meet professionals who work in digital marketing in our agency.

Work with some of the best growth marketers in Australia to improve your odds of getting placed in marketing.